To celebrate International Women’s Day and all of the stunning females in the automotive industry, we invited MINI’s exterior designer Khrystyne Zurian to talk to us – a conversation about genderless design, the personality of the MINI and changing consumer trends. 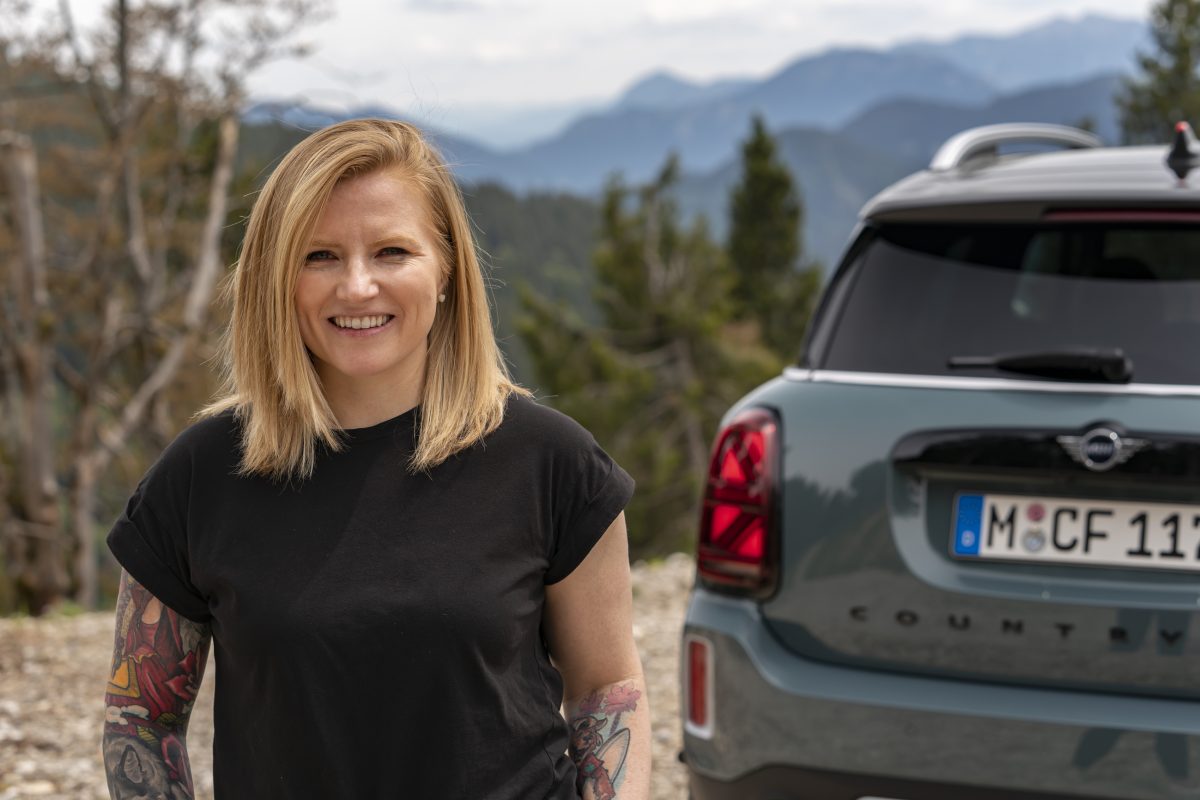 You grew up in family with a strong affinity to cars and auto mobiles, to what extent did that shape you and your career?

I grew up in my dad’s garage, hanging around his shop and this is what we called his design fabrication studio. Being exposed to that process at such a young age had a huge impact on me. I loved walking through the shop and seeing the artwork come to life. He was able to bring me along as a kid to the studio and I was just fascinated with all the design sketches. I really wanted to have a creative desk, an art desk, like they did. He would bring home markers, pencils and all sorts of creative utensils for me to practice with. I actually wasn’t interested in cars until a much later age, but I realized that this exposure to the process at such a young age had a huge impact on me when I started a career in a creative field. That pushed me into car design, because it blended my love for art and automotive. Cars were always part of the background and I just didn’t realize that that is something I want to do until later. But it was always there, the passion was always there.

Your father designed concept and film cars. What drew you the to design of consumer automotive?

The film cars to me were always an amazing expression of creativity and imagination but being able to solve the demands of future mobility in a creative way is challenging – and to me this is design. This drove me to want to work for an Original Equipment Manufacturer. What struck me about consumer automotive was that you’re able to create a product that impacts our every-day life and answers to real mobility issues.

Your first (car) love was a red MINI Cooper S. Why? What was – and still is – unique about the car?

This car had so much personality, it was so much fun to drive. I remember driving to the canyons in L.A. and taking every corner like driving a go-kart. It was a manual transmission and I just loved how connected I felt to it. I gave it its own characteristics, I named it Cooper, because clearly it was a MINI Cooper. It had its own personality and the dealership would always send me this little box every year with things like stickers and messages you could hold up to other MINI drivers. There was this sense of community and it just didn’t feel that way with another car. When I moved to Germany, I had to sell it and it was heart-breaking. It literally felt like giving away your pet or leaving a family member behind. But that’s what I love about MINI: Once you’re behind the wheel, you create this special connection with the car and somehow, it’s an expression of your personality.

The MINI is often associated with a ‚car for women‘: Is the MINI’s aesthetic from your perspective feminine? I’m aware that you probably get this question a lot, but I have to ask anyways (laughs).

I do get this question a lot (laughs). I think this idea of the MINI as a feminine aesthetic is a stereotype from 20 years ago. This is what the guy’s magazines have written about the MINI in the past. But, if you read the text, it also says these guys love driving the car because it’s so much fun to drive, it handles like a go-kart, and it’s super-fast. I see MINI as an inclusive brand where the design appeals to all genders. Like I said, it’s able to create an emotion between car and driver, it expresses your individuality and that’s not tied to one gender.

So, there’s not a specific target group thought of within the design process, for example women or men?

No. MINI is more than an aesthetic, it’s an attitude. When you look at the MINI JCW GP, I see so much power on such a small package and to me it conveys this dynamic driving experience. If someone wants to describe this turbocharged 302 horse power, 0 to 100 KM/H in 5.2 seconds as feminine then I’m like hell yeah, I’m all for it!

Historically, car design as well as the automotive industry has been very male-dominated. Given that fact, can there even be such a thing as genderless design of cars?

I believe that car design is genderless. We have two examples in history where there has been a gender specific car. In 1955 Dodge produced ‘La Femme’. It was painted pink dusty rose with sapphire white to convey femininity – the interior was pink rosebud print. There was even a matching umbrella, matching hat and a purse with a lipstick case and cigarette case. It was completely designed by men but built exclusively for women and their marketing campaign read ‘First and only car designed for Your Majesty, the modern American woman’. The car was a huge failure, it sold less than 1500 models and was canceled two years later. And in 1963, Hurst introduced this Dual Gate Shifter, also known as ‘His n Hers’, that permitted automatic or manual shifting where his side was the aggressive, performance and manual and her side was automatic. It came with a key that was for his personal keyring and prevented her from overrevving the engine while waiting for the automatic shift. The technology behind the dual shift and the application was new and innovative but the marketing was sexist and regarded as one of the worst pieces of car design from the era. This came at a time, in the 1950s, women started taking a leading role in purchasing automobiles. These gender stereotypes through the assumption that women required a different aesthetic to males has proven to be a huge failure. So, my point is that you can see that gender bias is a cautionary tale in car design.

I think that we tend to forget about all of the women who laid the foundation for females in automotive design. There is for example Helene Rother, she came from Leipzig, and was the first noted female car designer for General Motors. But soon after her, followed several other women in the 1950s and GM labeled them as ‘Damsels of Design’. They are responsible for innovations in the interior and safety features that we see in cars today. Not only the women at GM, but women in general, have attributed to all aspects of car design that has shaped the cars of today. We were never taught that automotive history. It’s something that’s rarely ever been talked about. These women were given their own area and they were kind of hidden away from the publicity of car designers at GM at that time.

So, we are dealing with a lack of knowledge regarding female design of cars?

What is important to you personally during the design process? Do you have a favorite part?

For me, most important is that we approach design with the same spirit of curiosity and innovation that was intended with the original MINI. We have a responsibility to our heritage, to respond to the needs of sustainable mobility. The MINI was created out of necessity, it is purely functional design that defined this idea of clever used space. I want to stay true to our brand values in the design process and the creative product that responds to the needs of the customer.

You just referred to MINI’s brand values. How can the value of recognition or iconic design and innovation be linked?

Iconic design is driven by innovation and has always been. Again, if go back to the original MINI since it is one of the most recognizable cars, we see that it was truly driven by innovation. It’s a pioneer in packaging, engineering and design. It was developed in the response to a powerful need of a small compact car during the oil crisis. Because of that, 80 per cent of the footprint is given to passenger and luggage space. This whole footprint created the architecture for the car. The transverse mounted engine not only gave the car its clever packaging, but it also had its performance advantages. I believe that the innovation behind this car led to its shape, but it also led to the fact that it’s an iconic design today.

And lastly: How do you envision the future of the automotive industry?

I’m excited for the next generation of mobility. It’s a really interesting time for innovation in automotive design. We’re heading into a more connected future and with AI and digitalization, cars are able to anticipate and respond to vehicle occupancy needs and commands. Also, we’re seeing a huge shift in consumer mobility which is changing the idea of ownership. Electrification is already challenging our traditional vehicle architecture and manufacturing processes, so we’re finally breaking away from this three box proportion.  I envision a future where we implement a circular approach to car design, achieving this through long lasting design, social inclusiveness and sustainable development.